The History of Rhandirmwyn

Rhandirmwyn is situated in the famously beautiful Upper Towy Valley, on the east bank of the river Towy in the parish of Llanfair-ar-y-Bryn. The name Rhandirmwyn itself has only been in use from the early 19th century, but the area has been inhabited from Neolithic times.

North of Rhandirmwyn, the farmhouse of Gelli Vechancrouches beneath a ruined Neolithic chambered cairn, not far from a large prehistoric standing stone at the ruin of Ty Newydd. There are at least five Iron Age forts in the Upper Towy Valley, as well as numerous Bronze Age barrows, standing stones, cairns and a stone circle thought to be aligned to the moon. These remnants of a mysterious past suggest that once there were organised communities here, who constructed significant defensive sites on the hill tops and enacted ritual and funerary practices which have left their mark upon the landscape.

Sarn Ddu, which runs along the eastern edge of the valley, is an old Roman road. Indeed, the element sarn which means’causeway’ is often associated with Roman roads and occurs in a number of field and place-names in Blaenau Tywi. The Romans were clearly motivated by the search for valuable metals, as their exploitation of nearby Dolaucothi Gold mine shows. Rhandirmwyn may also have been attractive to them because its rich deposits of lead. Radio carbon data suggeststhat mining activities were already taking place here in Roman times.

Capel Peulin (St Paulinus) near Ystrad-ffin was reputedly founded by Paulinus, the teacher of Saint Teilo and Saint David, in the 6th century. It is therefore an intriguigingpossibility, that Teilo, and David himself, the patron saint of Wales, were educated here in this valley.

Strata Florida Abbey was granted the Manor of Nant-bai,(present day Rhandirmwyn) probably by the Lord Rhys, the last ruler of the kingdom of Deheubarth, in 1164. The administrative centre for this far flung grange had different nuclei, possibly moving from its original site at Ystrad-ffindownriver to Bron-cwrt and then to the hamlet of Nant-bai.

The open pastures on the hills would have appealed to the monks of Strata Florida, as would the potential income from the mineral deposits underneath them. Sheep ranching and mining being two specialities of the Cistercians. Though the focus of Nant-bai as an upland grange would be the mountain pasturing of sheep by tenants, it is thought that the pattern of enclosures for arable use on the valley floor was in place by the late medieval period. This suggests that some of the field-names for these ‘enclosures’, may be at least 500 or 600 years old.

The earliest document pertaining to the Nant-bai estate is an agreement in January 1512 between Richard Talley, the Abbot of Strata Florida and William ap Thomas Goch and his wife (the illegitimate daughter of the said abbot) for the lease of the grange of Nantbey ‘and the mill of the said grange’ the rent payable was nine marks. Forty years later the monasteries had been dissolved and the Grange of Nant-bai was let at an annual rent to the Crown of 14s, to Rice and Anne Wyllyams,also of Ystradffin.

Thomas Jones, alias Twm Siôn Cati (c.1530-1609) the rogue and literary figure, although born in Tregaron, was associated with Rhandirmwyn and a ‘cave’ at the Dinas was one of his reputed hideouts. His romance with Joan, the heiress and widow of Ystradffin is well known, but they did not actually marry until old age had caught up with them. He was certainly on the wrong side of the law as a pardon from Elizabeth I suggests in 1559, for all escapades and obligations. In his will he left nine head of cattle to his base son and the rest of his estate to my loving wife Johan. He was also a professional genealogist, a poet, high sheriff and a JP.

Post Medieval Rhandirmwyn – Mining, the Rise of the Chapels and Education

Rhandirmwyn is deeply rural and yet, because of its lead mines, it is part of the nation’s industrial heritage. The Nant-y-mwyn Lead Mine near Rhandirmwyn was heavily exploited from the 17th to the 19th centuries. The Campbells of Stackpole (who became the Earls of Cawdor in 1827) acquired the 8000acre Ystradffin estate in the early 18th century. This meant that they owned almost every farm in Rhandirmwyn from Bwlch-y-ffin down to Glan-rhyd-y-mochnear Cilycwm until the latter half of the 20th century. However, their main interest in acquiring the estate was the highly profitable lead mine. A large part of their income came from the mine. It has been estimated that over the fifty years or so down to the end of the 18th century, the mines generated some £300,000 and employed about 400 people locally. But towards the close of the century output fell drastically and the mine was leased out from the 1820s onwards.

During the 18th century Nonconformity took hold in the area. Seion Baptist Chapel was founded in 1827, as an offshoot of the 18th century Bwlchyrhiw chapel three miles further up the valley. Salem Chapel was founded in 1829 (rebuilt in 1852)and was a Methodist connection. Both Ystradffin and Dugoedydd farms at either end of the valley, were also strongly associated with the Methodist cause.

Ystradffin chapel at ease was used by the famous circulating schools in the 18th century. In 1840 there was a day school at Nantbai with 25 pupils and the teacher was paid £5 per annum by Earl Cawdor. There were also three Sunday schools attended by 120 people of all ages. In 1858 Cawdor gave land to the vicar and churchwardens for a National School in the village. The first headmaster was in post by the following year. An inspector’s report in 1867 records that the children ‘must exert themselves more’ the perennial complaint of teachers through the ages!

The mine closed in 1931 during the great Depression. The first telephone was installed at Nantymwyn House in 1929 which also had a generator, but electricity did not arrive in the village for everyone else until 1960. Between 1949 and 1954 the area struggled against plans to afforest by compulsory purchase 48 farms in the valley. The campaign against it was successful when the plan was abandoned after a change of government. However, the Forestry Commission eventually bought most of the land it wanted piecemeal in subsequent years. The next challenge was the proposed Llyn Brianne damin the late 1960s. Opposition to this was overruled and Fanog farm in the headwaters of the Towy was drowned, only to reveal itself again in drought summers.

Apart from physical changes to the valley Rhandirmwyn’s most significant loss is the families who have been associated with the area for many years partly due to economic and social factors post World War II. There has been a huge demographic change to the inhabitants of the valley, firstly because of the establishment of Coleg Elidyr, a Steiner School for young adults with learning difficulties and in addition an influx of mostly English people. Nevertheless, there is a community association which organises local events each year such as an Easter Egg Hunt, Teddy Bear’s Picnic and a visit from Santa. Also, that great institution, Rhandirmwyn Show, when former and current residents still meet up, is still held on the last bank holiday Saturday in August every year. 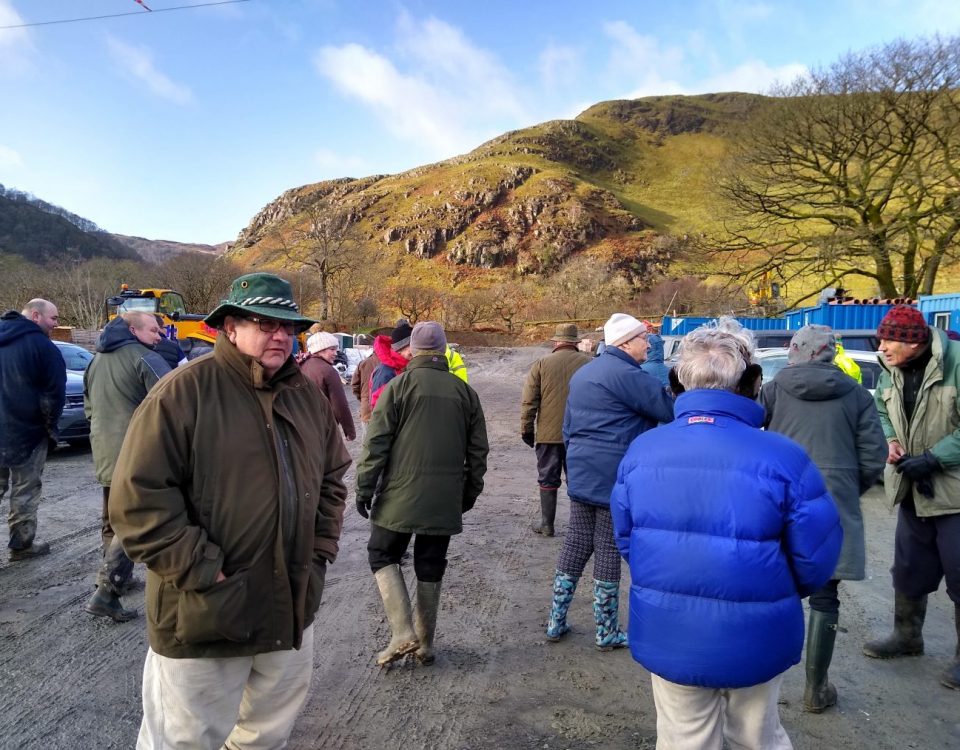